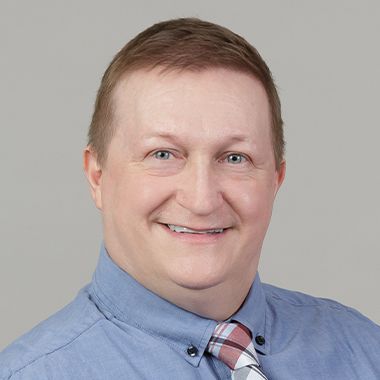 Scott Thompson has been a board-certified Family Nurse Practitioner for the last 22 years. He graduated with a Bachelor of Science in Nursing from Missouri Western State College in 1994 and was awarded the prestigious Regents Scholarship for academic excellence from 1989 through 1994. Scott went on to graduate with a Master of Science in Nursing from the University of Missouri with a GPA of 3.8. In 2005, he was nominated by colleagues and physicians to receive the Missouri Nurse Practitioner of the Year Award; and in 2012, won the Clinical Nurse Manager Leadership Award.

Scott’s past employers include 12 years at St. Luke’s Hospital, and five at UMKC Student Health and Wellness. Prior to his role at CenterWell, he spent two years each at Aspire Palliative Care and AdventHealth Primary Care, where he had the opportunity of caring for geriatric patients with multiple health conditions.

Scott believes in working as a team with every patient, discussing and planning a care approach together with professionalism, compassion, and light-heartedness.

Most of Scott’s family has passed on, and he was inspired to a career in healthcare to honor his grandmother and follow in her footsteps. She was a nurses’ aid, whom he always looked up to and had the greatest respect for.

When he is not caring for patients, Scott enjoys reading, watching movies and Netflix, and spending quality time with his friends.

Provider numbers for agent use

Contact a CenterWell Representative in your area.
Connect
You belong at CenterWell

Our expert, compassionate healthcare professionals are always here and ready to help answer any questions you may have. That's how CenterWell delivers patient-focused primary care.

Become a patient
Schedule a tour